Honda Chiptuning - named after founder Soichoro Honda and founded by him in 1948 in Tokyo. Honda's appearance in public is strongly influenced by its successful history in motorsport. The Japanese were able to make a name for themselves especially in Formula 1 as an engine supplier and with their own racing team, think of Ayrton Senna or Alain Prost who drove with Honda a large part of their success. With Honda Chiptuning, the power of almost any model can be increased. Success as the world's largest motorcycle manufacturer and award-winning MotoGP team gives us special pleasure in Honda Chiptuning.

Honda chiptuning - When the name Honda falls, many think of models like Accord or Civic. We think of a racing history full of emotions, MotoGP riders like Valentino Rossi or Dani Pedrosa. But not only in motorcycle and motor sports Honda is successful. In addition the Japanese company is one of the leading car and motorcycle manufacturers, which is why Honda chiptuning was developed for many models. More sporty car models like the Type R are of course also available with a specially developed Honda chiptuning.

Up to 26% additional power thanks to the highly specific software. 2 years warranty on engine components. 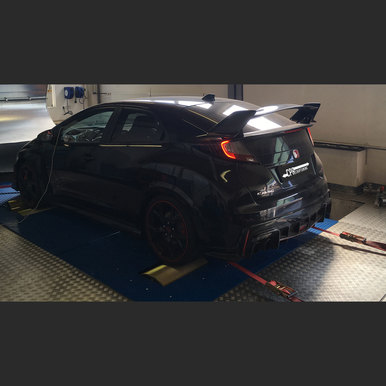 Let our specific PowerBox software inspire yourself. In the Honda Civic Type R she provides an extra power of up to 64 hp and 115 NM torque.